In 1998 I got Catz for Christmas from my dad. I thought it was so cute that in December 1999, when I was in 8th grade, I bought Petz II. A few months later, my brother showed me how to get online on my dad's computer. Since my brother had his own Geocities site he had started, I decided to get my own, too, and make a petz site. I had found some other petz sites and thought that it would be fun to have my own.

I didn't know what to name my site, so I just called it Melissa's Petz Page. I knew nothing about creating a website, so I used a program to attempt to make my site. The layouts weren't very good-actually the first layout wasn't really one at all. I think it was just colorful font on a black background-I can't really remember. Still, somehow my page did earn an award.

Soon after creating Melissa's Petz Page, I began to learn the basics of html with some help from my brother and quite a bit of help from lissaexplains.com. In 2001, I renamed my site Elfland Woods Kennelz and Cattery. The name came from a short story I had started writing but unfortunately I tossed it out years ago. Elfland Woods was a pretty small site. I didn't have much in the way of adoptions since I could never find Petz 3 or above. I also only had Paint to make layouts with, so my layouts weren't the best. My favorite one was my first real one-a Fall layout, which included buttons that had little leaf and flower graphics that I had scanned onto the computer. Even with adoptions lacking and basic layouts, I still had some visitors and got many awardz, I loved updating EWKC and having a little space on the web. EWKC had shows, Find-Its, Win-An-Awardz, Petz Craft, and even a Holidays graphic sets page. Overall, it was a pretty classic Petz site.

Elfland Woods did pretty well for a couple of years, for a small Petz II site. Toward the middle of 2004, I think, EWKC started not having many visitors. It probably would have, had I been able to find Petz 3 (I'm not sure if my dad's computer at the time, would've been able to handle Petz 4 or 5 and the computer in the dining room wouldn't have even handled Petz 3. Anyhoo, so it was apparent that EWKC was waning. By late 2004, I decided to semi-close Elfland Woods. I didn't really want to close it but by then, nobody was visiting anymore. I left up just a page saying that my site would change themes but that I'd keep a page dedicated to petz, up.

For a couple of years, I did nothing with my site. In late 2005/early 2006, I got back into collecting American Girl dolls; I saw a couple of fan doll sites, from some members of the AG boards I joined. So, I decided to use the space that had been Elfland Woods, to be my new doll site (first Inner Star, then renamed Cherished Playtime). Like I had promised, I had kept a page dedicated to Petz and to Elfland Woods.

Off and on I would google Petz sites but I had thought the PC was kinda dying. I realized that it wasn't, when I stumbled upon the RKC forum in summer 2007. Seeing the community still around, I decided to get Petz 4 and try making a new website. I called my new site Sunlight Mountain Petz. Sunlight did well for a few months. However, in December 2007, I noticed that a couple of sites I remembered from the "old days" were back and it made me miss Elfland Woods. I know, I know, it's just a site...but in a way it's not. It's something that's been a part of me for awhile... In January 2008, I abruptly closed Sunlight Mountain Petz and reopened Elfland Woods. Somehow, I realized that Elfland Woods was the only Petz site I wanted to own.

So, here I am-here is Elfland Woods Kennelz and Cattery. A classic Petz site that has been around since 2001-with a four-year hiatus in between. Some things have changed with the site since it's hiatus, but overall, I think it still has the same charm that it's always had and I wouldn't want it any other way.

These are some of Elfland Woods' past layouts, from 2008-present. 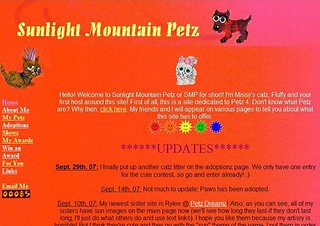 Version 1 was my first layout using a program other than just Paint. It was bright and used a top, left and right frame, so had 3 parts pieced together-Fall 2007. 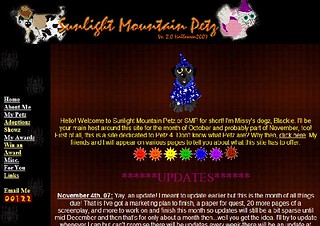 Version 2, Halloween 2007, was made in 3 parts (top, left and right) and was a nice, black and burnt orange color scheme. Nothing spectacular but I still think it was a cute Halloween theme. Halloween 2007. 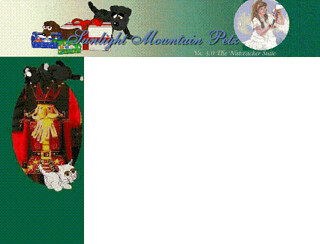 Version 3, The Nutcracker Suite, was pretty and Christmassy with the forest green and white color scheme. The theme was The Nutcracker-which I love. The Nutcracker image on the left side, was from a photo I took. This layout was up for Holidays/Winter 2007/8. 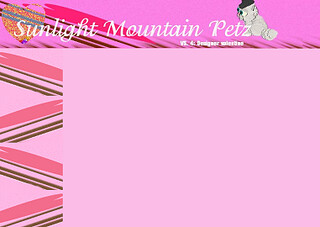 Version 4, Designer Valentine, used a pink and brown color scheme. I played around with PhotoPlus a bit, and came up with the design. The left and top frames don't really match but I think it was still pretty snazzy in it's own way. Valentines/Late Winter/Spring 2008 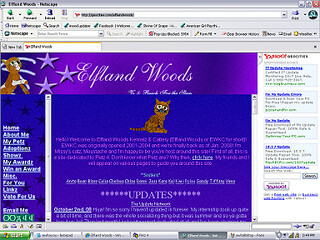 Version 5, Reach For the Stars...well, I wanted a Memorial Day theme-could double for Fourth of July but it didn't quite come out how I wanted it. It was something, at least, it's not in my favorites list. Spring/summer 2008. 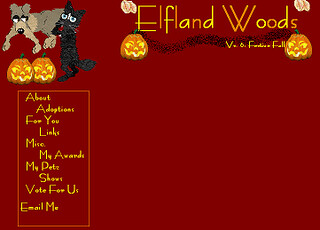 Version 6, Festive Fall, was a simple Fall layout.It still used the three-parts since I was still using top/right/left frames. This was my Fall 2008 layout. 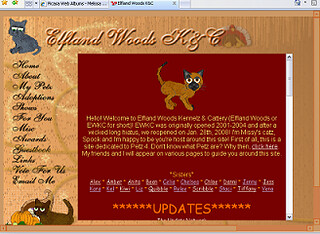 Version 7, Thanksgiving 2008, was my first time doing an inline frame layout. I also got Gimp so I could get some pretty paintbrushes. I decided to make a Thanksgiving theme and I think it came out well. This layout was up for Thanksgiving 2008.. 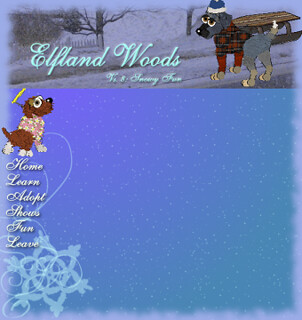 Version 8, Snowy Fun, is one of my favorite layouts. It featured a photo I took and had a pretty blue, wintery theme. Fabien looked cozy, ready to sled all day, hehe. The layout also featured a snow paintbrush all over, since snow around the holidays is classic-Holiday/winter 2008/9. 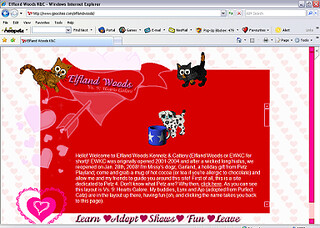 Version 9, Hearts Galore, is also one of my favorites. It's an adorable Valentine's theme. I wanted to try making parts of it "come out" of the background-like the hearts and catz' tails. Also, Lynz looked so adorable with his little "jump" pose-Valentines/late winter 2009. 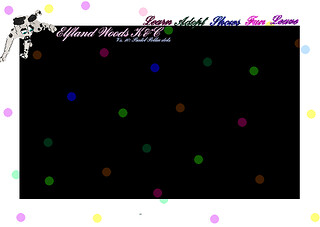 Version 10, Pastel Polka Dots, was a Spring pastel Polka dot theme. I decided to sort of go with an inverted color theme-white/light as the border and black/dark for the text area. It was simple in looks but still cute-Spring 2009. 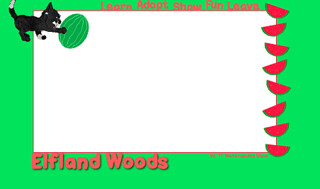 Version 11, Watermelon Slice, was a simple little summery layout. I thought watermelons would be a good theme since they're a popular summer fruit-yum!I like the little side border with the melons stacked up. This layout was up for summer 2009. 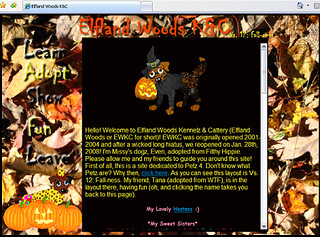 Version 12, Fall-ness, used a photo of a bunch of leaves that I had taken, specifically for that purpose. I thought it would make a nice background. Since it was a Halloween layout, it of course had to have pumpkins and petz in costumes!

All pages are (C) Elfland Woods, 2001-present. Please don't take anything without asking. Thanks.